Rustic North is a family run business, located in Whitehorse, and has been a part of the Yukon since 1979. It’s owners, Gerry and Lynda Peters, joined forces (and children) in the early 80’s and with their new family, began to explore the backroads and waterways of the central  Yukon. Gerry’s log building training and journeyman carpenter  skills led them to many of the  territory’s historic sites and restoration projects. Countless weekend adventures would result in a great love of the abandoned architectural  history and the amazing driftwood it left behind!

In 1992, when an invitation from friends brought them to the Southern Lakes region of Yukon and Northern B.C., and an old abandoned gold mining town, a new creative avenue was opened. With permission from the owners, construction of a small cabin was undertaken using the fallen remains of the numerous buildings that had been built in the early 1900’s! Windows, doors, beams and siding were given a new life and Rustic North had found it’s character. 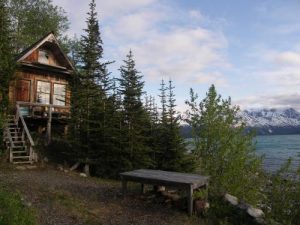 The following years found the company working closely with the cabin industry and introducing owners to some of the more functional and aesthetical products available from the market place. A showroom was added to their base facility on Platinum Road in Whitehorse, and Gerry’s unique furnishings and embellishments went on display with the outdoor accessories.

These days finds the company on a seasonal agenda. Summers are busy with gathering and salvaging inventory for the numerous upcoming projects. Winters allow time for shop creations, rustic alterations and showroom displays. Although the kids have grown and gone, weekends will often find the family (and grandkids) searching some remote beach or old dump for treasures!